Hotarubi no Mori e (蛍火の杜へ, lit. Into the Forest of Fireflies' Light) is a movie based off of a one-shot shoujo manga of the same name, written by Yuki Midorikawa. The story was first published in the July 2002 issue of LaLa DX in Japan as the one-shot. Later, in July 2003, it was reprinted in a tankōbon short story collection of the same name, which included four romantic one-shot stories written by Midorikawa, including the titular story.

To the Forest of the Firefly Lights is considered as a starting point for Midorikawa's best known work, Natsume's Book of Friends.

Hotaru met Gin when during the summer when she was still a child. Every year without fail, she came to visit Gin during her summer holidays. Year by year, Hotaru slowly grew into a young lady, but Gin, being a spirit, remained the same as he did years before. How will things keep going between them?

The film, released in cinemas on September 17, 2011 in Japan and played until to the end of November 2011, has remained faithful to the original atmosphere. In the drawings, the colors, and the beautiful backgrounds, the heart-striking emotions can be both felt when reading the manga and when watching the film.

A young Hotaru Takegawa got lost in the forest during one of her summer visits to her grandfather's home, and as she began to cry, Gin found her. Hotaru initially thought he was a human, so she stopped crying and ran towards him. But without any explained reason, he avoided her. Gin told her that he is a spirit, loosely tied to the living Earth through a spell casted by the Mountain God of the Forest. Furthermore, if he ever touched a human, the spell would break and he would disappear.

Ever since then, Hotaru always spent her summer time at her grandfather’s place so that she could meet Gin every summer in that forest. Although she didn't take Gin seriously about his "don't touch me" policy, after witnessing other spirits of the forest dearly telling her not to "make him disappear", Hotaru came to terms and agreed to avoid any physical contact.

Year after year passed, and the both of them happily spent the summer time together. As Gin saw Hotaru's progressive growth, one summer she brought her middle school uniform to show how she had grown from the young child she used to be. At this point, she noticed how she had grown almost as tall as Gin. At the same time, she also realized that she had come to feel romantic feelings for Gin.

Another few summers passed, and Hotaru arrived at the forest with her high school uniform, showing again her growth. This summer though, Gin told Hotaru about his past, about how he was actually once a human. But after his parents abandoned him as a child in the forest, the mountain spirits took him up, later casting upon him a spell so that he could live on. Upon hearing this, Hotaru confessed how she would like to stay with Gin more once she becomes independent, as she wanted to stay with him for not just the summer, but also the fall, the winter and the spring, in other words, all year round.

Gin then invited Hotaru to the youkai festival inside the forest, unlike before where he only ever mentioned it. At the festival, as noted by Hotaru, the festival grounds looked just like a human festival would, with food stalls, people in festive nature and lanterns alight. Gin suggested tying their hands together with a sash to prevent themselves from getting lost from each other.

After enjoying the festival, they went for a walk on lakeside. Rather unexpectedly, Gin gave Hotaru the mask he’s always been wearing. At that given moment, he gave a kiss on the mask, as if he was kissing Hotaru herself, as an implication of romantic feelings to her. At first Hotaru felt happy, but she also felt that this might be her last summer with him.

Later, two children ran from behind Hotaru and Gin. As they ran past the two, one of children nearly tripped. Gin, being the nearest, grabbed the kid by the arm, unknown to him that the boy was actually a human. Only after the child give their thanks and run off did Gin and Hotaru realize that Gin was starting to disappear.

As Gin slowly disappeared, he asked Hotaru to come into his arms, as he finally could touch Hotaru in his final moments. As she embraced him in his final moments, he confessed his love to her, which she replied with a mutual confession. After Gin had disappeared, the other forest spirits appeared, thanking Hotaru for being there for Gin. Although they wished for him to keep living with them forever, they knew that deep inside Gin, he wanted to touch a human.

That summer, Hotaru knew she wouldn't look forward to the next preceding summers. But, she also knew that the fond memories and the few moments of warmth she felt from Gin would live on in her heart. Present day, many years after the events of that summer, Hotaru continues to visit her grandfather's place, facing forward towards the future.

The original soundtrack (catalog number: SVWC-7783) was released on August 24, 2011, less than a month prior to the release of the anime film. The music was recorded by Makoto Yoshimori, and the ending theme, "Natsu o Miteita" (夏を見ていた, lit. "I was Watching the Summer"), was sung by Shizuru Ōtaka.

All songs written and composed by Makoto Yoshimori. 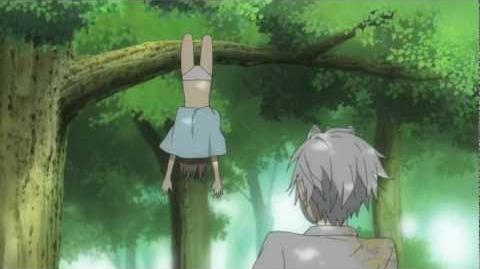 Retrieved from "https://natsumeyuujinchou.fandom.com/wiki/To_the_Forest_of_the_Firefly_Lights?oldid=18875"
Community content is available under CC-BY-SA unless otherwise noted.