A young male exorcist that responsible for sealing the mountain god, Hozuki in Episode 48 and Episode 49.

He was supposedly a young exorcist and still in training. When he saw the god Hozuki, he sealed Hozuki without any doubt. It was believed that he was doing so to test his own strength and ability to seal spirits, without investigating furtther about the spirits. Natori Shuuichi implied that the young exorcist as being ignorant. 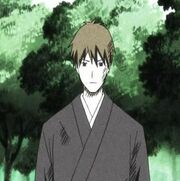 Two more male exorcists appear in Episode 47, an episode about Nanase's childhood memories. They make their appearance in the shrine where Mikage lives. They informed the chibi Nanase about the danger in the presence of a strong youkai, meaning Mikage. 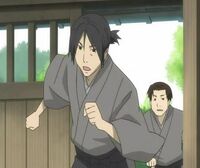 Rushing to help the young Nanase 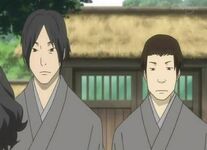 Add a photo to this gallery
Retrieved from "https://natsumeyuujinchou.fandom.com/wiki/Male_Exorcists?oldid=7753"
Community content is available under CC-BY-SA unless otherwise noted.